Free shipping on full price, unframed Ellen Rice print and gift purchases totaling $49 or more within the continental US.*  See details on the Sale page.  *Some exceptions apply. 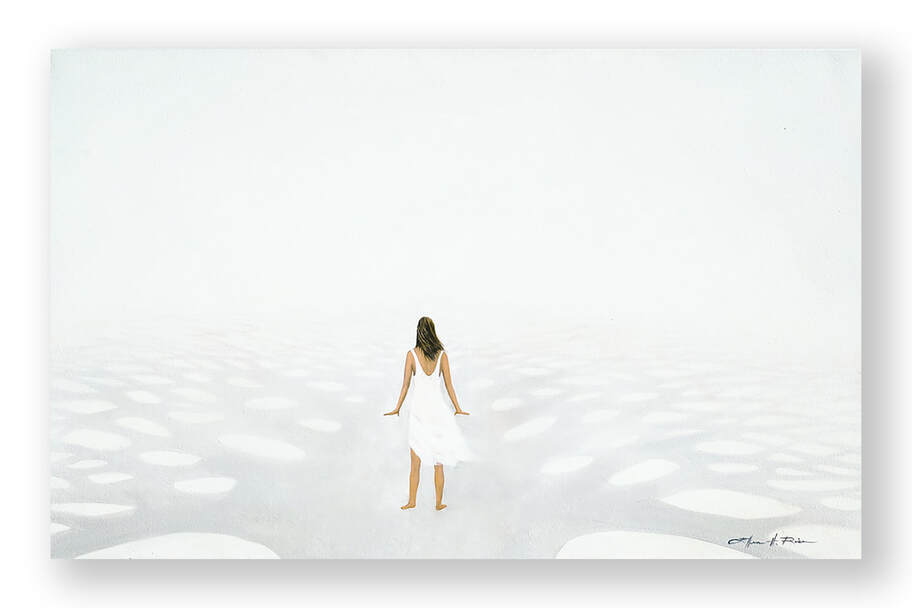 ​The original painting is available
​No matter a person’s age or place in life, I believe there is an innocent, pure child within seeking the right direction to go in life.

Every day, even as young children, we are faced with countless decisions in what has become an increasingly complex world. A study several years ago came to the conclusion that the average person makes in excess of 35,000 decisions a day, from choosing what toothpaste to use to making major, life altering decisions. In truth, life is far less complex, though it’s often hard to see.

I’ve prayed for direction as far back as I can remember. The image of this painting came in answer to prayer at a time when I felt I was not in the “right place” but didn’t know how to change it.

These Strength of Woman Series paintings have always come to me in times of seeking. I may not at first understand a vision's meaning, but usually when the painting is completed the message I was intended to get becomes clear, and I share my thoughts in writing, like here.

Sometimes, others viewing the painting get different insights, and I enjoy hearing them. It makes me happy to know a painting has reached someone in a way that is meaningful to them. To me, that means that in painting a vision given to me I'm fulfilling the purpose of the One who gave it to me.

I saw The Narrow Path several months after the Great Recession hit. My sole source of income from a flourishing gallery that I’d started in 1999 fell to half income the month the first bank fell. We’d been having a banner year, but now people had a hard time making up their minds about whether to buy a greeting card, let alone a $50 to $100 print. They were buying $5 bookmarks to frame for holiday gifts. For the next three years, as worldwide financial uncertainty grew, sales continued to decline. I was at one-third income but with higher expenses.

I had started over financially at age 50 after divorcing my husband of 28 years. I didn’t want to start over again. What now, God? He had provided then, through ideas for paintings and oddly enough, a map illustrating maritime research I'd done. The map miraculously drew national media recognition, gallery representation all over the country and landed me on national television representing the state of Delaware on QVC’s Quest for America’s Best, providing the funds to put a deposit on my house and later start my gallery.

For years I’ve seen people’s response to my more inspirational paintings and have been in awe.  It’s made me acutely aware of the Source of the painting ideas. My work is not perfect technically, but I frequently get personal thanks, some as long letters telling how a painting has helped them or a loved one, particularly my Strength of Woman paintings. In this recession that never seemed to end, should I give up on doing this and go back to the corporate world just to survive financially? More painting ideas came, and as I painted them, commissions and an award-turned-corporate-commission – all just in time to pay my bills.

“Faith,” the Bible says in Hebrews, “is the substance of things hoped for, the evidence of things not seen.”  Faith continued to be tested.

Before the great recession let up, road construction in front of the gallery took over. It lasted four years. I’d been looking for a new gallery location ~ and asking God if I should close the gallery ~ for years.  One day soon after the gallery’s location had been roadblocked for over three months, I told God:

Within days, an unexpected opportunity came to move the gallery to a new location, with the promise of being so much better than I’d hoped for or thought possible.

The meaning of the image of this painting became clear:
It didn’t matter where I was physically, humanly.  It mattered more that wherever I was and whatever I was doing was God’s plan.

There are more changes coming, new steps into the unknown. Rereading this today, years after writing all of the above, it's abundantly clear that life is not at all predictable even with the best intentions, plans and circumstances.

But this I do know.

​If you pray and listen and follow what you hear in prayer, what you discern may not take you where you thought you were headed, but you will be on the right path, that “narrow path” to a spiritual life of God’s making and that innocent child within will flourish as you were always meant to.