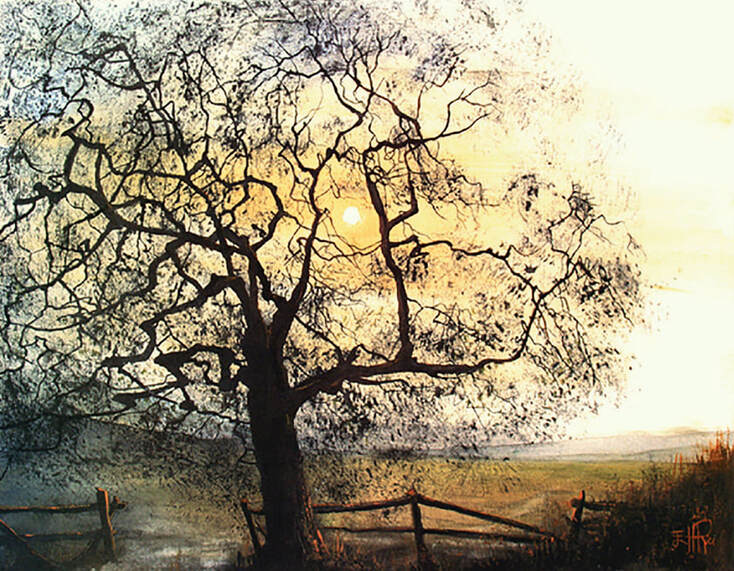 Though not new, "The Road Less Traveled ..." remains one of my favorite paintings.

I painted it with my mother-in-law in mind around the time she passed on. She was an angel in my life, a truly beautiful, loving spirit who brought light into the lives of many people whose paths she crossed.

She loved the feeling of light I captured in my early paintings, and The Road Less Traveled By is about light... and paths. This is one of those paintings that "painted itself." It's not a specific place, except perhaps in my heart, "the kingdom of heaven within," a place I'd like to be or perhaps somewhere I've been at some time.

I started with the sun and worked out from there. A distant mountain range just sort of emerged, then a meadow, then the old oak tree and split rail fence and the highlights from the sun gilding branches and grasses.

After it was finished, I put it in the middle of a large stack of prints to flatten out ripples from the water colors, and there it lay for more than a few years, forgotten, only to reappear at a time when I needed the special feeling of light it gives me most.

​To my surprise, the original's first showing drew a great deal of attention. It was a show stopper. After several showings, I decided to put it in print. Not everyone can afford an original, and I wanted to share whatever it is about this painting that draws often teary-eyed, emotional exclamations of "I love your tree!"

I named it after the last line in Robert Frost's poem, a poem whose sentiments strike home:
"The Road Not Taken"
Robert Frost

Two roads diverged in a yellow wood,
And sorry I could not travel both
And be one traveler, long I stood
And looked down one as far as I could
To where it bent in the undergrowth;

Then took the other, as just as fair,
And having perhaps the better claim,
Because it was grassy and wanted wear;
Though as for that, the passing there
Had worn them really about the same

And both that morning equally lay
In leaves no step had trodden black.
Oh, I kept the first for another day!
Yet knowing how way leads on to way,
I doubted if I should ever come back.

I shall be telling this with a sigh
Somewhere ages and ages hence:
Two roads diverged in a wood. And I -
I took the one less traveled by,
​and that has made all the difference.

Later, a woman who purchased a copy of my print sent me a poem the painting reminded her of. She'd clipped it from a church program many years ago, tucked it in a corner of her dressing table mirror and referred to it many mornings since. She said she wanted to share it:
​
"The Tree"
Sue C. Boynton

Lord, let me learn from this old tree,
That there is dignity in loneliness.
Beauty in broken branches,
Strength in twisted, storm-beaten tors.

Help me to see that underneath,
If roots go deep enough.
No storm can wreck the life,
That from them reaches to the sky.
​
Help me to remember the important thing...
To stand where God has placed me.

​
I hope you enjoy my painting. ~ Ellen