The Last Watch
of the U.S. Life-Saving Station at Indian River Inlet, Circa 1962 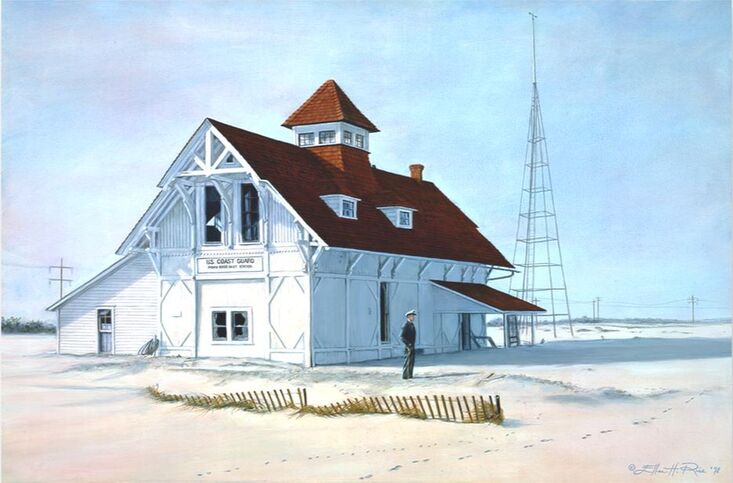 ​​"The Last Watch" is a portrait of the U.S. Coast Guard Station at Indian River Inlet, Delaware, on the day it was decommissioned in 1962. It was created to raise funds for the station's complete restoration.

​The original oil painting by Ellen Rice was painted over an eight-month period from a photo provided to her courtesy of the late Milton W. Cooper, then the last living commander of the station.

Ellen, a founding member of the board of directors of the Delaware Seashore Preservation Foundation, the entity in charge of restoring the station, describes below the moment in time the painting depicts. 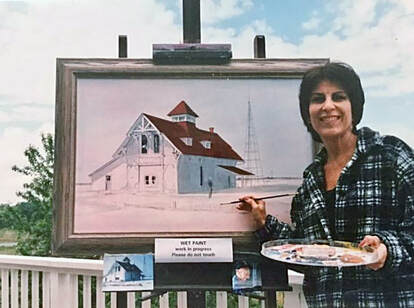 Ellen gradually adds thin glazing layers of color over The Last Watch's underpainting.
It is March 1962, the end of a day and the end of an era, as US Coast Guard Commander Milton W. Cooper, BMLC, stands with hands in pockets, taking a final look out to sea from the Coast Guard Station that had been in his command.

​The station is abandoned, its crew lifted out by helicopter during one of the East Coast's most devastating storms. It is an odd twist of fate for a building that had been the site of so many lifesaving efforts over the last century.

In the wake of the storm, the evening glow of sunset begins to shed its light over the station. More than two feet of sand is piled around and inside the building. Decades later, when the station is lifted off of it's foundation in order to be put on a higher foundation farther away from the water, still more sand was found inside the walls of the battered building, so fierce was the Storm of '62.

The dunes surrounding the station, from Lewes, Delaware, to Ocean City, Maryland, are flattened. The tracks of bulldozers, a half covered snow fence and two sets of foot prints leading toward the station, one human, the other animal, are all that mar the sand.

Looking around, an upstairs window in what for nine decades was the surf crew's bunker room, the windows of a door that once was the entrance to the boat room and later a pool room, and the boat room window behind the commander are blown out. The frame of one lies against the ocean side of the station under the roof of what remains of the back porch. There, the porch screens are blown away. The screen door still hangs, though crookedly, creaking with the breeze.

No flag flies, for the station has just been decommissioned. The weather vane atop the flag tower indicates a light northeast wind, but never again will a watchman make his four-hour log notation of the wind's direction. The days of service of the Indian River Station have come to a close.

The station at Indian River Inlet was built and commissioned as a U.S. Lifesaving Station in 1876 and is the second oldest Life Saving Station in its original position in the United States and one of the nation's most important maritime landmarks. It became a U.S. Coast Guard Station in the early 1900s and as such served mariners along the Mid-Atlantic until the Storm or '62.

​Today, the past touches the future. The station's doors are open once again, serving in a new way, as the Indian River Lifesaving Station Museum.