Steamboating on the Nanticoke
'The Avalon', flagship of the fleet, plying the rivers of Delmarva until 1920 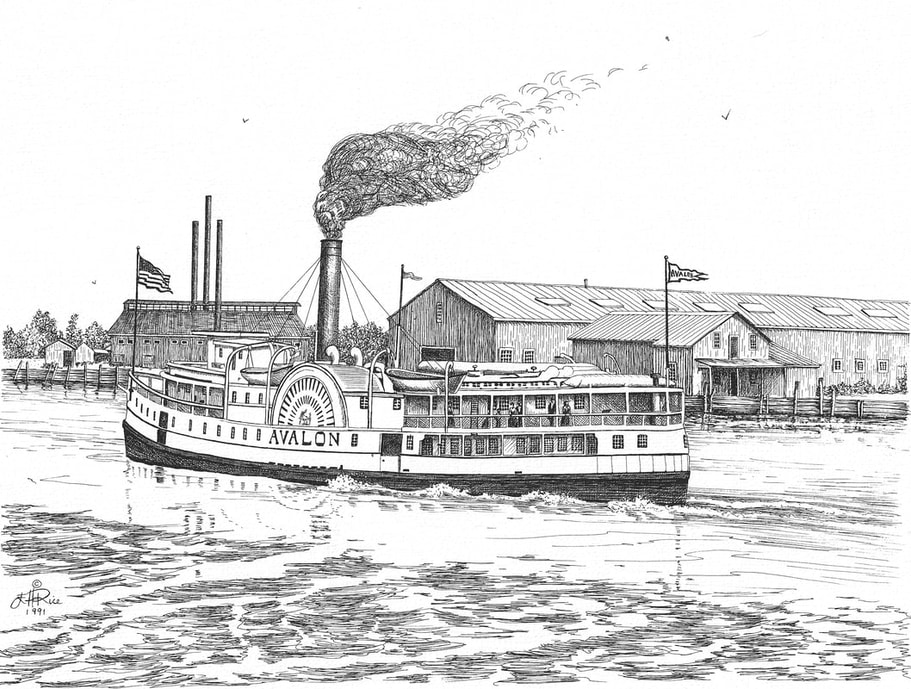 ​Available as an offset lithograph in two sizes.
​

Steamboating on the Nanticoke

by Ellen Rice
The reference for this pen & ink was provided to me by the late Wright Robinson, founder of the newspaper for which I worked as an artist, photographer, writer and editor in the 1970s and '80s. I was fortunate to be able to work with Wright and hear the many stories of life in Seaford in earlier years.

One of his favorite memories was of the steamboats that used to come to town regularly and the festivities they brought to town. Town folk would look forward to the arrival of the different steamboats and gather at the docks when they arrived, anticipating dance nights and short excursions. Among these steamboats was The Avalon.

Seaford's commercial water travel up and down the Nanticoke and into the Chesapeake Bay started way before train travel. Beginning in the early 1800s, they came from Baltimore and Norfolk and were key to travel and commerce until about 1926 and the advent of motor vehicles.

Many of the ships were rented once a year for Sunday school excursions to Sandy Hill or Bivalve, Maryland. On the trip home the town band would play on the top deck led by Charlie Robinson, Wright Robinson's father. Below deck were cattle and produce.

The last trips by steamboat to Seaford was about 1932 when the Avalon pulled into the dock down the hill from Burton Brothers Hardware and the whole town gathered on the docks for one last time to pay tribute to a memorable era now gone by.

I was happy to fulfill Wright's wish for a drawing of The Avalon. It was a pleasure and privilege knowing this fine man. Sometime I'll share what i can remember of how he started one of the Mid-Atlantic's most award-winning weekly newspapers, The Leader, in the farming community of Seaford, Delaware, going door to door selling 12-cent newspapers and some days writing his stories under the boardwalk in Rehoboth Beach, Delaware, so his family could enjoy days on the beach.... - Ellen
Below is an interesting first hand account of a young girl's 20th century
travels to the 'big city' on steamboats Joppa and Avalon
The following story is from a little pamphlet titled “Memories of Choptank,” which contains memories of a woman named Clara Rumbold Mitchell of what it was like for a young girl to take the steamboat up to the big city of Baltimore.

Clara Mitchell was born in 1899 in Preston, Md. She lived to the age of 105, passing in 2004. She worked as a seamstress. She was the first-ever member of her gender to cast a vote in Preston, Maryland, after the passage of the 19th Amendment granting women the right to vote. She was very active in the local Bethesda United Methodist Church. She spent her last 42 years as a widow. Her only daughter, Dora W. Mitchell, died two days after her mother. Here are her steamboat memories:
The Joppa and The Avalon … were beautiful boats. On entering the boat we climbed steps to the upper deck. We used to get the shivers walking past the cows and calves lowering and the sheep baaing…. On the upper deck was a large saloon or public room with a piano. In back of this was the dining room with white tablecloths, red napkins folded to stand up in the water glasses, and lots of white-coated waiters. The staterooms ran all around the length of the deck facing the inside. … They were so small, barely room for bunk beds, a very small washstand, and a chair, not as large as our pantry.

We had what we considered to be better quarters. Downstairs there were four large rooms, free cabins, one each for white males, white females, colored males, and colored females. They were large, airy rooms with windows on each side and six or seven clean single cots. The first thing we did upon entering the boat was to go to the free cabin, select our cot, deposit our luggage, and go upstairs to eat our supper on deck.

Out came the shoeboxes packed with good things from home, always bananas. We loved to watch the seagulls swoop down and look for the banana peels and other choice tidbits.

We were always invited to visit the pilothouse. Captains Corkran and Woolford and first mate Stafford lived in Choptank. We walked up the little steps leading to the pilothouse. Then always a smiling welcome awaited us. We were fascinated with the compass and we actually steered the boat. Seeing all the lifeboats and life preservers reminded us that it wasn’t the safest way to travel but I am not sure the danger did not make it more exciting.”

The boat sailed along with us sitting on deck, usually my Aunt Lily, my sister, and me. At times we saw friends. The first stop was Secretary. There was usually a stopover there. We had time to leave the boat and walk all over town, but what we liked was the two hour stop at Cambridge. It was like visiting a city.

The boat stopped at Long Wharf and we used to walk up that beautiful street. We stopped in the candy store and tried to find something different from what Perry and Dillon offered, such as chocolate babies and one-and-a-half inch long strips of colored candy containing coconut with pink, green, yellow stripes the long way. We also liked ’16 for ones.’ They were small chocolate bars named for William Jennings Bryan’s slogan about gold and silver. … One time I saw some chocolate disks about the size of a quarter covered with tiny white beads like confections. They were delicious until I discovered there were worms in them.

Then on to Oxford.… My mother had a friend named Tull that that lived in Oxford we stopped by there The ship left and went on to Easton Point. I think it [returned to] Oxford again about 10:00 PM. On we hopped and off to bed.

Long into the night we could hear the bells ringing, whistles blowing, calves bleating. It was wonderful. The boat made many more stops before it reached the bay. We had a little lavatory. It was always a little scary to look into the john and see the rushing river below.

Up next morning. I am sure we never had anything left for breakfast, but what did we care! We would be in Baltimore in time to eat. Never will I forget the wonder of entering the Baltimore Harbor. For about two hours we were passing every kind of ship from little squeaky tugs to ocean liners, all talking to one another in their own language, the whistles. I loved those way-down-deep ones.

"This whole trip to me was like a visit to another world. Nothing that we saw in Baltimore equaled the joys of [the experiences we had while] going there.…