Dance of the dawn 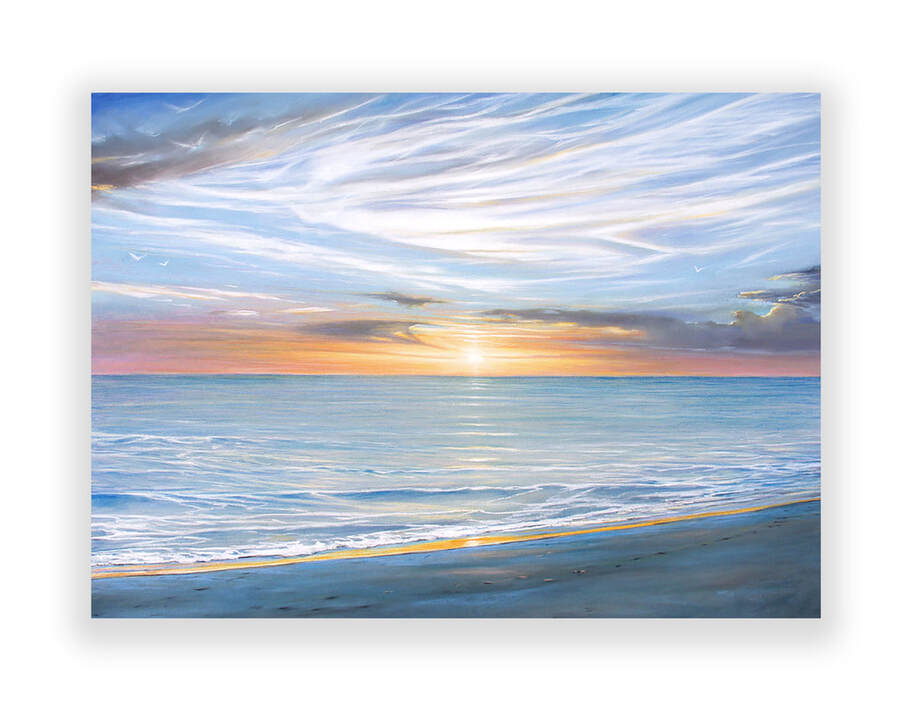 ​This is a painting of exultation, inspired by an extraordinary woman and her love of the ocean.

A handful of years ago, she said to me, “Oh, Ellen, you must paint a golden sunrise,” then proceeded to tell me of the time she lived at Indian Head Beach near Dewey (Delaware) and every morning would rise, very, very early to walk alone on the beach and watch the sun come up.

There was something so special about welcoming the new day at ocean’s edge. A fresh start, a new outlook, darkness left behind, forgotten in the glory of the moment. Sometimes, she said, she couldn’t help but dance, wet sand squishing between her toes.

The woman was my aunt, Eleanor Parker, one of the most special people in my life, an indomitable spirit, soul sister, God-mother, encourager, commiserator. She was soft-spoken, cultured, a reader who was equally as familiar with philosophers and poets as she was world events, the latter her least favorite. She was the daughter of a Navy doctor, inventor and author turned Admiral and presidential physician, unassuming, but outspoken (abashedly frank) when it was called for, a quoter of poetry, song lyrics and uplifting sayings.

She once developed and hosted her own talk radio program in the Rehoboth Beach, Delaware area. It was a hit. She always had the right words to fit the occasion. I had to budget my long-distance calls to her. We could easily talk for hours, and that was before cell phones and unlimited calling.

My aunt started out in life figuratively speaking with one arm tied behind her back – scoliosis, severe curvature of the spine. She wasn’t the so-called “beauty” of the family. That title went to my vivacious blond, blue-eyed mother. Aunt Eleanor and I were dark haired “handsome” thinkers, she said.

Rather than give in to a debilitating physical handicap or self-pity, she worked on herself, surmounted whatever problems came her way, developing in both mental and physical stature. She studied ballet. At one time she taught dance for Arthur Murray. She was considered one of his best teachers. She was graceful. Her movements flowed. Her hands told stories. You didn’t notice the infirmity she was so conscious of. She was one of the most beautiful people I knew.

It was her joyous footprints I put skipping across the sand in New Day, my largest pastel painting to date. They could be anyone’s, but to me, they’re her’s. When I look at this painting, I smile, seeing a sprightly spirit so in tune and enthralled with the beauty of the moment that nothing can hold back her leaps and bounds and pirouettes, movements timed with the ceaseless rhythm of the ocean’s foaming waves.

She is gone now, but as I look at New Day today, I imagine she has just danced out of sight and moments from now I’ll see her back again, the sun a little higher, seagulls swooping and diving and calling out their approval of such unbounded joy.

Around the time I was about to begin New Day, my gallery manager handed me a newspaper clipping about an art exhibit in Philadelphia called America Sublime. The exhibit, I later learned, was first shown exactly as we saw it, to the painting, in the mid-1800s in the exact same rooms of the Philadelphia Academy of Art. What a thrill to able to see this. The exhibit was of enormous paintings by America’s earliest career artists (all male), mostly from the Hudson Valley school of thought, who painted our emerging nation for the rest of the world to see for the first time.

Cole, Turner, Church. Gigantic, light-filled works. Theirs are paintings that fill huge walls with vaulted ceilings with an abundance of incredible beauty. Glowing skies, dramatic clouds, the kind of skies I love to paint. They’re works that you can view best at 20 feet, but then you can put your nose up to and still see glorious detail. They’re paintings that took substantial time, skill and love of our country’s sublime natural beauty.

I knew after seeing this exhibit that I had to stretch as an artist. I’ve craved to paint as large as these painters for some time. After seeing this exhibit, this craving became more urgent. I went home and purchased the largest canvas I could find, but started New Day as a pastel on a full sheet of cotton rag board first.

My originals had been getting larger each year, but nothing this big. I hope one day to find I have created my own legacy of enduring works for future generations ~ paintings that you can almost physically walk into, present day windows into life and Earth’s natural beauty.

The original, framed pastel of New Day measures almost four feet by five feet – not as large as many of the paintings I was privileged to view at the Philly exhibit, but getting there. It hangs in the home of a collector in Annapolis.

At the time of New Day’s completion, my Aunt Eleanor was in her 80s and had just been moved to an assisted living home in New Hampshire. She mourned the loss of her beach, but I believe she came to truly enjoy New England’s pine-scented woods, lakes and hillsides, familiar scenery where she once spent many years. Her last words of encouragement to me were to paint hills and creeks and covered bridges, perhaps even the cliffs of Newport, where we both lived in the past. God willing, I think I will.